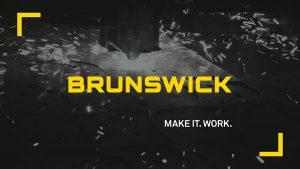 Brunswick Steel is a custom steel processing facility in Manitoba producing components for manufacturers. With a new focus on lean manufacturing, Brunswick Steel developed a plan to streamline their production processes. 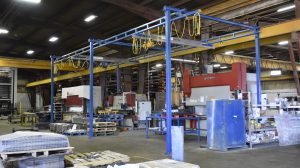 Through a two-phase plan towards LEAN manufacturing, Brunswick Steel recognized the need for more efficient material handling as a way to improve productivity and safety. With an added laser cutter, additional bending work cells were needed to handle the increased capacity. With no overhead lifting capabilities at these stations, way to manipulate materials quickly in the benders was needed that didn’t interfere with the high capacity overhead crane system. Tieing into the existing building support columns wasn’t possible so a new solution had to be developed.

After on-site consultations with Acculift, the decision was made to remove, then relocate and expand, an existing crane system Brusnwick Steel had at another facility to service two steel bending work cells. The existing system was under-utilized and could be repurposed to service these new workstations.

The existing system was 23 feet long and was supported by two columns at one end and was ceiling hung at the other end. The new system reused all the components of the previous workstation and was expanded to 43 feet, using six freestanding columns with no ceiling support requirements.

The first work cell has an intelligent lifting system with a powered vacuum lift, giving the operator very exacting control of the material. The second work cell has a hoist, hook, and clamp system for faster processing speeds.

Through careful planning with Brunswick personnel and Acculift operations, a fast turnaround install plan was implemented. The Acculift crew was able to dismantle, move, and install the new crane system, and have all components operational for Brunswick, at the end of two days of work.

After completing this project, Brunswick Steel greatly reduced the chance of operator injury, sped up production, and expanded their output capabilities. By reusing and relocating all of the existing equipment they were able to realize significant cost savings.

Calculate the ROI on an upgraded crane system for your business using this quick online form.

Springland Manufacturing – utilizing every possible inch in a lifting system